Mural at the corner of the quarter. The work depicting the composition of motifs associated with wall and press advertising in pre-war Gdansk. It combines elements of pre-war corporate logos and lettering typical for this period of time. The main accent is visual design visible from the view along the Szeroka street.

In addition, the building on the side od Tandety street gained a historicist belt of cornice and architrave, over the ground floor, made of artificial stone. The frieze created in this way can be used potentially as a place for future signboard of located there premises service, which would harmonize with the general overlook of the facade. From side of Szeroka Street the facade was enriched by additional painted components in the stripes of the wall between the windows and an elements of artificial stone referring the architectural division of the neighbouring modern residential quoter forming at the same time a cohesive space of the street crossing.

See on the map 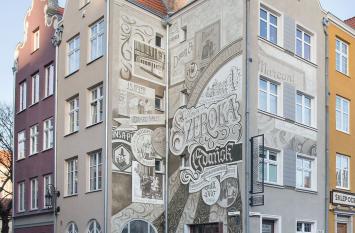